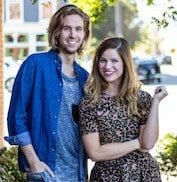 “Don’t chase people. Be an example. Attract them. Work hard and be yourself. The people who belong in your life will come find you and stay. Just do your thing.”

While The Kentucky Gent is primarily about me, what I’m doing, and where I’m headed I wouldn’t be able to do any of that without the help of some very important people in my life. Rome wasn’t built in a day, and likewise this blog hasn’t been built in a day either. It’s been many long days and even longer nights. There have been many days where I’ve wanted to give up. Whether it be because my traffic isn’t seeing an increase, or because I’ve gotten a negative comment from a reader it’s my group of closest friends that keep me grounded and moving in the right direction.

With all of that being said I’d like to introduce a new series to the blog, Unsung Heroes. This idea originally came to me while in New York. I was reading an article about the Unsung Heroes behind some of the biggest names in the fashion industry. There were countless stories of personal assistants, hair and make up artists, and just about anyone else you could think of that keep their bosses, clients, and friends going. I missed home quite a bit at that moment. Whenever I’m home in Louisville there are countless people that I can stop in and see, or ask to grab a coffee, like I did this morning with Elizabeth, an unsung hero of mine. Elizabeth wears several hats around town. Along with being the Editor In Chief at Louisville.com she also has her own successful food blog, Epicurious Louisville. When not busy with either of those she’s also doing other freelance writing work or handling one of the many social media accounts that she manages around town. Needless to say, I want to be her when I grow up.

This morning we met for coffee at Please & Thank You. Which happens to be one of my favorite coffee shops around town, and the first place Elizabeth and I met. We first met whenever I began writing for Louisville.com. In her weekly e-mails to them she would always encourage the writers to invite her to coffee because she would love to meet the members of the team that she hadn’t already. I jumped on the idea and ever since then she’s been one of my closest friends. She’s an incredible sounding board for me. Sometimes I have so many ideas bouncing around my head at once that I just need to get out. When that happens I’ll shoot her an message with what I’ve got on my brain. Within a couple of minutes I’ll have a perfectly structured response critiquing, helping, and condensing any/all ideas that I sent her way. She’s helped me in countless ways, but most importantly by giving me the opportunity to work with the Louisville.com team. I’ve made numerous contacts, attended several events, and created a name for myself around town thanks to the extended reach of Louisville.com. I’ve also had the distinct privilege of working on events around town with her like Best of Louisville and Taste of Innovation.

The Kentucky Gent wouldn’t be the guy he is, or the blog that he’s creating without help. Help from friends like Elizabeth is what keeps me chasing this crazy dream. Needless to say everyone’s continued support both on and offline is my biggest motivator, and for that I’m incredibly grateful.