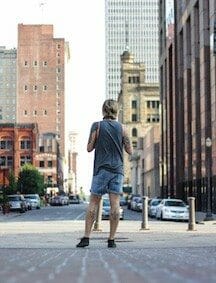 Are you a Libra? A question that I’ve heard so many times that I could scream. If it’s not that, it’s are you a lawyer. I mean.. really do I look like a lawyer to you? That’s a big fat no. Secondly, Libra’s are very level headed individuals, they weigh out the pro’s and con’s, and they aren’t risk takers. What exactly about covering half my arm in the scales of justice isn’t taking a risk to you? This is where I would typically launch into the cliff notes version of the story,  but today I’m giving the full story behind these tattoos.

It’s another personal story, but think it’s appropriate to share as Pride week is in full swing here in Louisville. So here goes nothing. I was there when we marched on Washington D.C. in 2009 for the National Equality March; where I experienced love, joy, passion, and shed more than a few tears. It was an experience that forever left its mark, in more ways than one. In the weeks leading up the March I ran across a poster for the march designed by Shepard Fairey that simply read “Defend Equality, Love Unites.” The simple message hit home with this boy from a small town who came out at 14, and I was on the phone with my tattoo artist within minutes to schedule an appointment to have it tattooed on my arm before I left for the trip. It was an incredible experience to see posters, fliers, and signs being carried throughout the march that I had tattooed on my body. Several people stopped to get photos with me, and I received more than a few pats on the back for it. Shortly after returning from D.C. I had the scales of justice tattooed on the front of my arm to symbolize Love outweighing Hate. It’s a never ending battle, but things are definitely moving in the right direction. I can still remember coming out at 14 to an incredibly conservative family and being the only gay person I knew. I had no one to talk, and I felt completely lost. I went through years of counseling as my family tried to force the gay out of me. It was an incredibly trying experience, but at this point in my life I’m thankful for it. I wouldn’t be the man that I am today had that not happened. Now whenever I visit home I see people I grew up with coming out of the closet, or little brothers and sisters of childhood friends coming out almost as early as I did. The battle certainly isn’t won, but I think we’re closer to it being over. I still encounter prejudice to this day, even living in a city as large as Louisville, but I’ll always carry a reminder of that day in Washington on my arm. Whenever I’m having a bad day, or when I’m letting something someone said get to me I just remember those moments there at the Capitol surrounded by thousands of other people just like me fighting for what we believe in, and I know that everything is going to work out just fine.

Show your pride in Levi’s with Out Magazine just like I did today by tagging photos of your in your Levi’s with #OutInLevisContest for a chance to wins $300 Levi’s Gift Card. I’d love to hear your stories as well, whether that’s via comment or shooting me an e-mail. We’re all in this together; gay, straight, bi, or ally. If you’re in Louisville Pride festivities are well under way, but the real party is this weekend. Check out my article for Louisville.com for more information on what’s going down this weekend on the Belvedere. If you’re in Chicago, I’ll be in your lovely city celebrating Pride this year, and I’d love to run into you, so tag along with me on Instagram!

Stylishly and Humbly Yours,