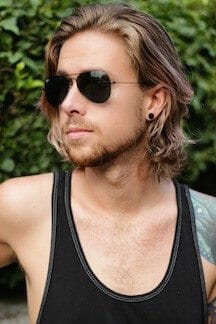 Summer isn’t quite over, and I’ll never say goodbye to the ’90s. I may be ready to say good-bye to Summer and embrace Fall with warm and open arms, BUT until that happens I’ll keep on showing off some thigh and letting my guns get some sun. One of my definite go-to looks this summer was these Levi’s cut off shorts (or short shorts in general) and a tank top. While it wasn’t as hot as some past summer it was certainly still a doozie in my opinion. I’m not a fan of being hot regardless of how hot or not it is. Thus the reason you’ve seen me in tank tops more often than not this summer. Layering is a bit harder in the warmer months. Not impossible, just harder than usual. While we’re beginning the inevitable Summer cool down nights are starting to get cooler, and what you wore during the day may not cut it if you’re going to be hanging out outside during the night. Easiest way to combat that? Tie that favorite plaid shirts of yours around your waist, or toss it in your bag. It’s light enough that it’ll keep you warmer at night, while not making you sweat through your layers.