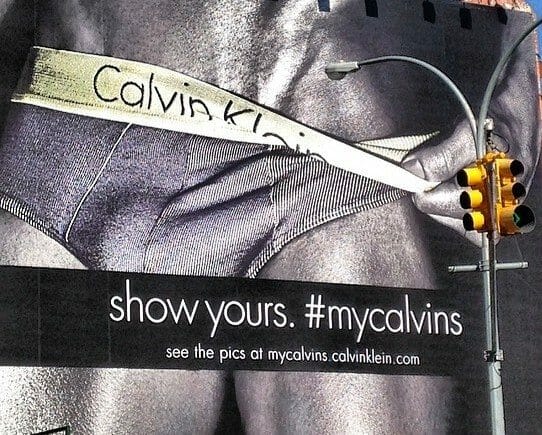 The iconic brand has done it again. The prominent waist band that Marky Mark and that smirk made famous is ready to make a name for itself again in a bold new way. Calvin Klein’s latest social media campaign has celebrities, bloggers, and the average joe dropping trou to show off their Calvins. Called “My Calvins,” a play on the label’s iconic 1981 commercials starring Brooke Shields, the multi-tiered digital rollout is meant to promote the classic Calvin Klein logo waistband. Calvin Klein originated the campaign by sending items to influencers. Artists like Iggy Azalea and Fergie, models like Miranda Kerr, and bloggers like Leandra Medine (of The Man Repeller) and Chiara Ferragni (of The Blonde Salad). The only caveat was that said influencers were asked to Instagram a photo of his or herself, in which the waistband is visible with the hashtag #mycalvins. Their hope with the campaign was that the hashtag would catch on with the public, and the public has answered with an incredible response as you can see above. I’m not complaining, at all. I think it’s a brilliant marketing strategy on CK’s part, as they learn to embrace the ever-changing face of the industry and how we, their demographic, interact. What are your thoughts? Too much, or just enough?