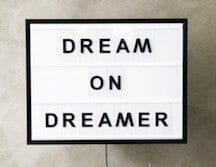 How Quitting My Day Job Saved My Dreams I’ve always given 110% in my jobs of choice growing up, sometimes giving so much of myself professionally that it left other areas of my life unbalanced. I’ve came to realize over the years that the traditional mentality of what it is to have a job may not be for me. When I’m clocked in helping build someone else’s dreams into reality what am I doing with my dreams? Typically placing them on the back burner.

The first couple of months of a new job are always fun and exciting for me as I learn what is I’m doing, face some challenges, and find my place in the company. But inevitable there comes the question, “What’s next?” I’m never satisfied with following status quo, and when I’m working with someone that is I tend to become very unhappy. This feeling generally leads to complacency in my work life, following the same motions day in and day out and ending with the same results day after day. My head is always full of ideas, and I’m quite the daydreamer. I’ve never quite fit into the normal molds that are prescribed to people as we grow up. My dreams tend to be far fetched, and I’m never quite sure to make them a reality. But as soon as I realized that building an empire for others when I have several empires of my own to build wasn’t in my best interest something in my head clicked.

Up until yesterday I had kept a part-time job to help cover the cost of living (secrets out, blogging doesn’t exactly pay the bills for me, yet), but due to my unhappiness at the job it was time for us to part ways. For the past year there has been a constant struggle of what I want my life to look like, and what it actually looks like. I have dreams and aspirations of becoming a successful blogger, a terrific freelance writer, an extraordinary event planner, as well as a social media guru. Unfortunately up until now I was too busy focusing on making a living that I forgot to live. I’ve continued to place my dreams, aspirations, and goals on the back burner. Wondering about the what ifs, worrying about whether or not I was on the right path, and not knowing where to start. I’ve never been more scared of making a decision in my entire life and because of that I know that I’m headed in the right direction. By continuing a cycle that has up until now proved very unsuccessful I’ve perpetuated my own fate. By being afraid to make ripples of my own I’ve been swimming for the other team this entire time. But as of today I’m back at ground zero. My only steady income is coming from my writing (however meager that may be at the moment), and what better place to start than at the bottom?

Ultimately, what I’m trying to say is that if you shuffle from job to job because you can’t seem to find one that fits don’t think that you’re broken. Maybe the job for you isn’t out there, maybe you’ll have to create it for yourself. Because like the old saying goes “where there’s a will, there’s a way.”

Images borrowed from Fox on the Run