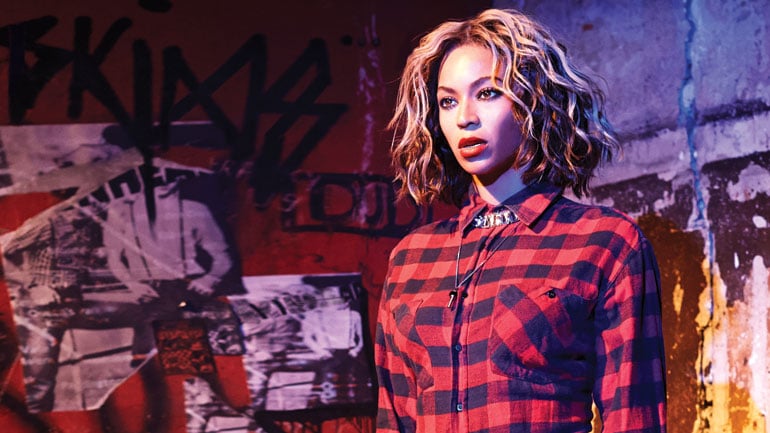 Well –  to be honest I’m just now coming out of the coma that Beyoncé’s new album had left me in. I was majorly bummed that I missed out on her concert when she was here in Louisville last week, and went to bed fairly early to avoid seeing my Instagram and Facebook feeds flooded with “I love Beyoncé!” I thought my only solace was that I had seen her in concert earlier this year; that was until I woke up to a Facebook message from the Queen herself. I figured it was to tell me how disappointed she was that I missed her show, but to my elation it was the announcement of a new album. I honestly don’t think I’ve ever jumped out of bed so quickly. Without any hype or publicity Beyoncé took the world by storm. I guess we all finally know what she was getting at when she was telling us all to “Bow Down” earlier this year.

828,773 copies were sold JUST last weekend, a feat made even more impressive by the fact that the album was an iTunes exclusive for the duration of that period. The album was the fastest-selling to ever hit iTunes and sold 617,213 copies domestically. Featuring collaborations from Drake, Frank Ocean and Beyoncé’s husband and daughter Jay Z and Blue Ivy. The self titled album also hit the #1 spot in 104 countries.

I don’t even know where to begin on the fashion, style, models, sets, or over all look of any of the videos. They’re all incredible. They’re all SO different for her, and I think that’s why her name hasn’t left our lips since she made all the gays around the world collectively orgasm at the same time. If it had to happen I’d say Yoncé was a the perfect one to pop our cherries though. For the select few of you that have yet to bask in the splendor that these videos are I’ve included 30 second clips of all my favorite videos below.

Pretty Hurts: (Written by Sia) The words of this song are beautiful, they’re by Sia so I’m not surprised at all.

Blow: Winner winner chicken dinner right here. The video is fun and shows us a different side of Beyoncé, a sexual, flirty, fun side, and I’m certainly not complaining.

Yoncé: Joan Smalls, Chanel Iman, and Jourdan Dunn backing up Beyoncé. This was a no brainer.

Flawless: This is the remastered version of “Bow Down” that we heard earlier this year. She’s got her Chola on and is ready to take on the world.

Grown Woman: The one I was the most excited about. I’ve been waiting for this to be released officially ever since I saw her perform it this summer.

In a press release that followed the surprise drop, Beyonce said the move was in part motivated by a desire to not repeat the traditional album promo cycle. “I didn’t want to release my music the way I’ve done it,” she said. “I am bored with that. I feel like I am able to speak directly to my fans. There’s so much that gets between the music, the artist and the fans. I felt like I didn’t want anybody to give the message when my record is coming out. I just want this to come out when it’s ready and from me to my fans.”

What’s your take on the visual album? Let me know what you’re favorite song is and why! If you’ve not bought the album yet and want to after all these teasers, head over to iTunes to get your copy.